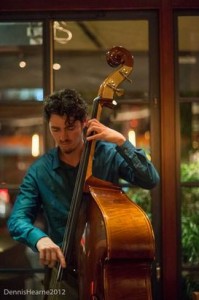 Ollie Dudek is a San Francisco native who started playing the electric and upright bass in his teens.  His stylistic influences revolve mainly around the musical genres of  Swing, Blues, Bebop, Afro Cuban and Classical. In regards to musical education Ollie spent much of his time studying music at San Francisco State University and it is at this time where he began to immerse him self into music played at local jazz clubs.

Ollie has been Called a “gifted young player” by music editor and reviewer Scott Yanow.  His interesting bass lines and rhythmic pulse drives the music forward towards new and exciting heights.  Ollie earns a living playing local venues, fairs, and festivals throughout the San Francisco Bay Area with a variety of talented musicians. He plays often at bars/clubs, private parties, as well as at various after hours events and is an integral part of the jazz community.  Ollie has also performed at the Monterey Jazz festival. In addition to recording on several recordings with Flautist Gerald Becket, Ollie can also be heard on his own album titled Bay Tones: The Changing Scene with pianist Grant Levin and drummer Omar Aran.